FLON: I saw you play a great set at Modular Nights at Substation, and thought I’d ask you for an interview, so here we are.

AURICK: Thank you for the opportunity, I’m happy that you were able to catch it. I wasn’t sure how it was going to go but all the feedback from that set has been nothing but great things.

FLON: At the risk of diving in too far right away, I noticed that you mention catharsis in your song descriptions and in the title of one of your pieces. I often think of music that way, too, so I wanted to ask if catharsis a driving force behind making music for you? Does it lead you to make the kind of music you make, or does it just happen sometimes when you’re making music?

AURICK: Catharsis is the cornerstone of my creative process. My first project Fathom The Void is a lot denser because we usually apply concepts after the recording to it, but the process is the same, just with another person. I am a lot more straightforward with where it’s coming from in my solo work. My mission in music is really “this is what it’s like on the inside with all this stuff”. I do my best to translate that to sound and put it out there. The most transparent example of this is my album Mesolimbic Demolition, the outline is in the album description and all phases of it are detailed as exactly what they are supposed to represent in the “about this track” section in Bandcamp. 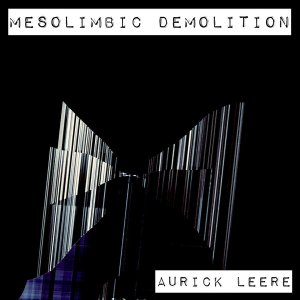 FLON: How did you settle on Modular Synthesis to be the toolbox for your expression? Did you begin making music with synths?

AURICK: I started circuit bending because I liked the concept. I quickly found the limitations of bending pedals and found Modular Synthesis. I got a diy system to see if I liked it. It was kind of a test to see not only how much I liked building stuff, but also to get more used to soldering to see if I could stand it outside of just doing bend points here and there. What got me about Modular is that it can be anything your imagination wants it to be and there are no rules or regulations as to what you can or cannot do with it and that really feeds my needs as a creator. I also get to build a lot, which also happens to be a lot of the fun for me with my system, as long as everything goes well. I have had a couple modules blow up on me and I’ve broken my fair share of things bending. But that comes with the DIY territory. Modular Synth is where I began making music, I always wanted to make music and Modular was the only thing I have been able to take to and that has made sense for me.

FLON: Do you build all of your modules? When you build do you start from scratch or kits, or both?

AURICK: I build absolutely everything I can DIY. If there is something that I absolutely want but isn’t in a kit form or the schematic isn’t available, then I buy it. I do kits or PCB/Panel combos and source parts to save more money. Any case I have is built with some help from friends. I’m at the point now where I’m going to take a stab at going from the ground up and do some Strip Board layouts I can find and maybe start to Breadboard some circuits to maybe make something that way.

FLON: Do you have any advice for those who are interested in modular synths, but are intimidated?

AURICK: Take it slow and be patient. Modular has a lot of dynamics that have to be explored to be understood. I have found that since it is so open, it’s taken a while for me to really find my space in it. I can not tell you how incredibly different my original recordings are from what you saw at Modular Nights. Don’t put yourself into debt buying every cool thing only to resell and lose money like I have. Start from ground one with the essential building blocks and get a foundation and build off of it, like I didn’t. I’m just now coming full circle and the equipment I’m getting now is for playability of the style I found. I’m kind of kicking myself for only just now thinking about that dynamic. If you have any questions, reach out– everyone was new once. Module makers are some of the most humble and friendly people I have ever met. The DivKid and Mylar Melodies of the scene have a wealth of knowledge and are more than willing to share that knowledge and talk shop anytime. Youtube is your friend when it comes to patch ideas and explanations. Finally, cases are the most expensive part and it’s scary to look at the prices. Build your own. Power and hardware are the most expensive part of a modular case. If you got some time and are willing to make a couple mistakes and learn some stuff, you can build that 12u, 104hp performance case you have been eyeing for a couple hundred bucks instead of dropping over a grand. There are even free case plans and instructions to build a cardboard skiff if you really want to save money.

FLON: Sounds like solid advice to me. So what’s next for you and/or Fathom The Void? Any new releases, tours, direction changes?

AURICK: Fathom The Void will be playing Modular Nights June 1st. So that will show off the homemade percussion and my circuit bending as well as the dynamic of 2 people making this kind of music together. This will be the first time we have played live. We are finishing up the artwork for a new album. It’s about 90% done. Audio is finished on that one which will be getting a limited cassette release on Industrial Coast records and it will also get a digital release on fathomthevoid.bandcamp.com. This one really is a direction change from what we have been doing. I have an album that’s been sitting for a while that I’ve wanted to do that’s based on Robert Plutchik’s theory of emotions involving 2 feedback loops I accidentally made that I’m thinking it’s time to start seriously working on. The great thing about conceptual and experimental music is that there are no confines to style or direction. Whether it’s solo, or with Fathom the Void, it’s all very in the now and “well, let’s see what happens today”.

FLON: Well, I look forward to hearing the new stuff, and I’ll try to make it to the show. Great talking to you. Thanks!

AURICK: It’s been a pleasure. Thank you for the support and taking some time out to ask me some questions.