CHAD & GARRISON: Hey, good to be here. we’re just meeting up to mix down some live tracks, etc….you are on the line with both of us here in the FF zone>

FLON: So first let me ask, which came first, the costumes or the band name?

C&G: well, actually, the costumes were made by someone that we were playing in a 3-piece with. He was playing as Red Squirrels, and we joined him for a while for his live shows, and he made suits for the 3 of us. around that time (these were the Myspace days) we made a separate Myspace page for the live version of the band (the 3-piece), and called it “Red Squirrel’s Forrest Friends”. The spelling of forest was a typo, but when we went on to continue playing as a 2-piece, the name sort of stuck.

but the short answer is: the costumes came first. 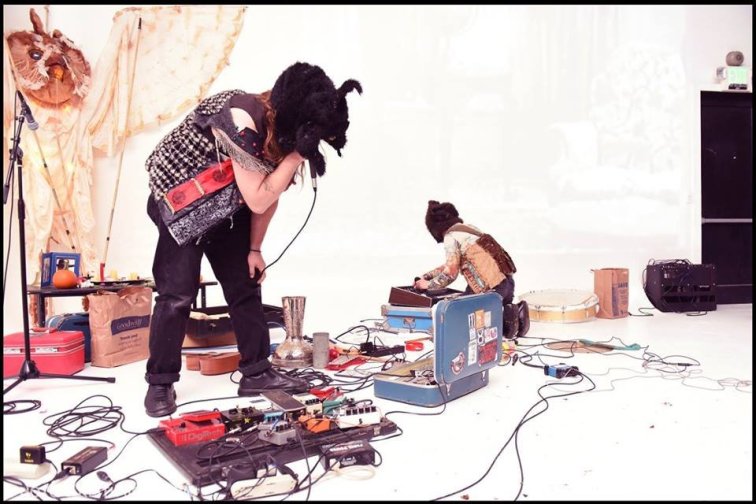 FLON: The mix down– is this going to be for a full album release?

G: well, we try to record every live set when we can, and then at some point we go through them and put them on our Soundcloud in some form (sometimes in pieces, sometimes the entirety of the set). right now we are digging through stuff from a mini-tour we did with Modal Zork.

C: “Official” releases, like the Chocolate Monk release, or the Debacle release, etc, will sometimes contain bits and pieces of these as well as additional tracking or sound sources mixed in, or sometimes entirely different pieces worked up specifically for a given release.

FLON: Cool. So before we go further, can you describe for folks who’ve never seen you what they should expect from one of your performances?

C: We surround ourselves with a select arsenal of the finest instruments and noise makers, I assume the spirit of the wolf within me to leap and play and frolic with Garrison, who has assumed the otter spirit, and we attempt to improvise mini songs or suites of music/sound in the guise of on-the-spot animalistic improvisations. Imagine if a werewolf and a weird otter creature tried to make music together, how would it sound and look?

G: “a floor full of instruments and a sky full of fur”. weirdo swamp cave vibes.

FLON: Well, I’ve seen a couple of your shows, and I have to say both of those descriptions are apt. So, you recently toured– any particular shows or venues that were of particular note?

G: well, we went down to do a little weekender a few weeks ago. in Reno, we couldn’t get a proper show going, so brought a generator and rounded up some locals and did a rad show in a long pedestrian tunnel. We didn’t know how it was going to work out, but probably at least 40 folks showed up, and there was even a lady doing projections of the ceiling while we played. — Las Vegas was a weird show, it was going to be a late show, but up until 1AM, it was uncertain whether the show was even going to happen. there was a bunch of bikers that took over the bar, and there was a soft boogie blues rock band that was playing forever. anyway, as it turns out, the bar was pretty full when we played at 3AM. things are different in Las Vegas.

that’s just from this last trip. we have more travel stories, for sure.

FLON: Did the bikers hang around, or was it a different crowd for your set?

C: They were hanging around at the very beginning and sort of cajoling us about our weird gear and setting up on the floor, but once we started playing and they saw that we could care less about their half-hearted taunts, we seemed to annoy them away, which was fine by me.

FLON: Haha, awesome. So since Garrison brought it up, give us one more weird story from tours past.

G. We can’t decide on one. A guy pooping on the sidewalk in a lawnchair with a blanket over his head, Chad clearing a pizza place with a solo set and then the both of us playing to an empty room and competing with the loudspeaker announcing people’s pizzas are ready, doing a live feed from a Motel 6 room in Montana (still can’t believe the neighbors didn’t complain), playing a house-party in Bakersfield that offered all-you-can-eat edibles, spilling gasoline all over the jeep multiple times when we had the generator with us, getting chased off of a farmer’s land when we were recording in a tent, and so on. there’s some bites instead of one story.

FLON: Well, yeah. Jeez. So, any “official” releases, shows, or t-shirt designs coming up that you want to talk about?

C: Working on another tour for October, still pretty stoked on that Chocolate Monk untitled release, hoping to work with them again in the not too distant future, we try and have a tour tape for each tour in limited editions, watch for those, and a few good local gigs here and there. Who knows, maybe someone will book us overseas or at least on the east coast that we can turn into something? Who knows the future is bright for Forrest Friends!

FLON: Look forward to hearing those. I ask these questions a lot, but I always appreciate the answers, so I’ll ask you guys how you found yourself doing this kind of stuff? Where did your musical journey start, and do you play in other projects?

C: My musical journey started pretty young, but specifically I fell in love with Rock music, and music in general when I found Alice Cooper around age 8 or so, my grandfather gave me a reel to reel and a few tapes for it that I used to layer tracks of the vacuum cleaner, out door field recordings, and people talking, performing various edits such as pans, fades, drop ins, and slowed tape and I think that’s how I fell in love with sound. I found punk through sonic youth really and a friends older brother gave me a tape of a warped copy of Confusion is Sex by Sonic Youth that I loved, as well as some mix tapes of stuff like the Misfits and Dead Kennedys which also made a deep impression. I learned of zines and bought a few as well as records when I could until I found mail order catalogs and started sending hard earned allowance money off for all the punk and weirdo and metal records I could manage. This I consider my true education in music, Garrison and I met in the early days of high school and played in our first real band together, a punk band called Free Punch Out. We did a few Black Flag and Minor Threat covers as well as our own originals, so we’ve had a long time to develop our ability to improvise and play off of each other. I personally also have a deep love of metal and have played in quite a few heavier bands over the years with my current project being Tolt, which is psychedelic death metal. I find I really enjoy both the improvised and more composed approaches so its important to me to have different projects through which I can explore those avenues.

G. Hmmmmmm, it’s hard to say how I found myself doing the kind of stuff that I do. sometimes you have things inside of you that you attempt to get out? It’s hard to say where my musical journey started. It’s been a pretty ongoing thing to surround myself with musical stuff for most of my life, fr sure. I mostly just do Forrest Friends, but have done some occasional dabbles with over-the-top absurdist weirdos Funky Photos, done some yelping and performative skronk with CEOs Inc., and have done some solo YouTube DJ-ing as Unborn Hacker.

FLON. On the subject of improvisation vs. composition, do you lay out any structure for Forrest Friends at all? Do you have signposts you try to hit during a performance, or predetermined elements you plan on bringing into a particular set?

C: Not really, but I will say for myself I sort of take mental notes if there’s things I like from one set or another, not specifically to reenact those moments, but more to explore the overall vibe that I dug. I also will find a new instrument that I might get excited about, or a way or sequence of playing I hadn’t thought of before. But we agreed long ago not to over think or talk to deeply about a set beforehand. After we might analyse it, especially if we liked it, and in this way we do refine our approach, but it’s a very slow and organic refinement with very little guided or structured intention other than to be ourselves.

G. Yeah, there’s definitely certain terrain that we hit that I might want to hit again, but it’s more in the vein of overall vibe, like how weird or bizarre it may have been. Sometimes we might talk about something we might try, or how we might start a set, but often that goes out the window when it comes time to play. More recently Chad has been doing some sort of pre-determined “beats”, but they’re not totally pre-determined. He could talk more about that.

C: Recently I acquired an iPad and I’ve started using some of the free music apps. One of which is a drum machine app. The free version allows you to save only one pattern, so I’ll randomly change it without really listening, so that when I drop it into a set neither of us has ever heard the beat, to keep it in the improvised vein.

FLON: Well, cool, guys. I’ll keep an eye out for the latest tour tapes and check out that last release, and I’m sure I’ll get to one of your upcoming local gigs. Keep me informed and I’ll share stuff on the FLON Facebook page. Great talking to you.

G. You are in my prayers.